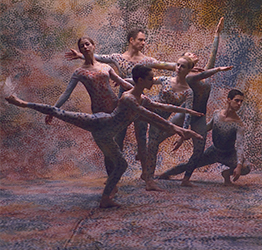 To celebrate the release of Cunningham, an inspiring documentary profiling the life and work of dancer Merce Cunningham, we’re running a ‘Chance’ inspired workshop.

Chance is a technique Cunningham used as a choreographic device in order to provide an element of surprise in his pieces. The dancers involved would develop sequences based on chance using Cunningham’s set boundaries. Cunningham focused on time, space and weight, so all of his moves were developed around these principles. In order to develop chance, Cunningham would use techniques such as rolling a dice or using instruction manuals to determine which moves would be used with which and in what order/direction with which dynamic.

This workshop is suitable for ages 16+ years.

Book your tickets to watch the film at Ipswich Film Theatre here: http://iftt.co.uk/film/cunningham/